The manor was built by the Lázár family in the 17th century, but it gained its final shape only in the 20th century. The base stones of the gate, which also supported the former fence, are decorated with plasterwork typical of the 19th century. The windows of the facade facing the street are divided by pilasters with Corinthian capitals. 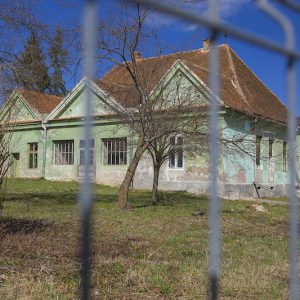 The Benczássy family is of Armenian descent; they fled to Transylvania in the 18th century and settled in Zagon. Lord-Lieutenant Lázár Mihály left the house and the belonging estate to them when he was placed in Sibiu after the 1848-1849 War of Independence. A park once surrounded the building, the beauty of which is still preserved by a few remaining pine trees, including two gingko trees, as well as a magnolia tree. The building is located in the centre of the village, by the side of the main road, close to the Reformed church. The building has become quite eclectic as a result of the numerous reconstructions during different stylistic eras.

The arcades and thick walls of the former outhouses belong to the late renaissance style, while the divided windows of the front porch are reminiscent of urban villas from the turn of the century. The building originally had a rectangular layout and was divided into two main sections. Three protruding risalits were later added in the direction of the garden. These risalits all have gable roofs, tympani at the gables and accentuated courses which confer a classicising aspect to that side of the building.

Property status: It is the private property of the Beczássy family.