The settlement famous for its salt mines, abandoned mines and salt lakes, started its bathing life in the middle of the 19th century. The first officially authorized medical bath in Sovata was the famous Gera Bath, which was followed by a series of other constructions. The Resort of Sovata developed at the turn of the century. Its Romantic, Apline-style, wooden villas once met all high standards. A part of these villas is also the building constructed in 1930, by the Mayor of Târgu Mureș, Bernády György. 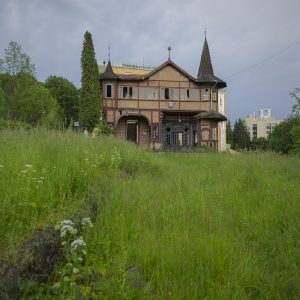 Bernády, who initially was a graduate of pharmacy degree, was the mayor of the Szekler city between the period of 1902-1913 and 1926-29. Due to his agility, he managed to transform the small , sort-of sleepy city into a modern XXth century big city, with new public buildings and modern infrastructure. The house, which was Bernády's favourite place, after the death of the great politician remained in the hands of the family until 1946, when his widow sold it to  wealthy Jewish buyer from Bucharest. The new owner did not have a long time to treasure this place, for in the time of communism the property was nationalized. The new “owner” of the villa became the Romanian public bath company, which in some way took care of the building, but did not perform the major renovations. After the change of regime, the heirs of the last owner required the restitution of the estate, which was only good for the fact that the big state-owned enterprise gave up in taking care of the building. Therefore, the villa was left for many years without someone to use it and take care of it. This and the fact that no major renovations were made, left the building in a threatening condition, with a leaking roof, uninhabited, with open doors. After the litigation, that has been closed for just a year, the heirs of the last owner, two very elderly people living abroad, have recovered their assets. However, the state of the house was not improved. Today the building, declared a monument in the 1990s, is practically life-threatening.