The castle was built in the Classicist style, and an old driveway stretches behind the building. Its symmetrical and rather puritan main facade is defined by the tympanum supported by four simple pillars. Its only decorative element is the striated cornice. The building’s doors and windows have simple, undecorated lintels; the two planes of the roofing are reminiscent of the Baroque style. 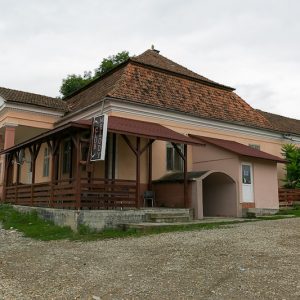 For some reason, the castle from Felőr/Uriu has been excluded from historical literature; there is therefore a lot of uncertainty regarding its past. The work of Biró József pertaining Transylvanian castles mentions only that the castle was built in 1813. Taking this fact into consideration, it is unlikely that the manor was constructed by the Betegh family (as it cannot be certified that the family had property at Felőr/Uriu during this time), but rather by the Kozma family. Member of the Hungarian Guard, Betegh Dániel moved here only later, after the Napoleonic War. The construction of the manor was most probably commissioned by Vice-Ispán Kozma Imre of Kézdiszentlélek/Sânzieni, and was later inherited by the Betegh Imre through marriage.

It currently houses a cable-television company and a pub; a few families live in the rear side of the building.