Because of its ruined state, the local government of Bardoc (Brăduţ) purchased the manor from the nine inheritors with its own funds. The goal is to restore the building for touristic purposes. 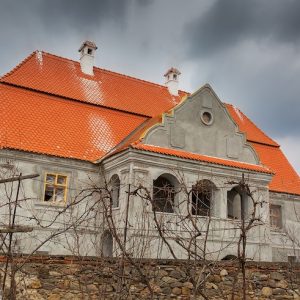 Through the arcaded porch, a series of rooms with beamed ceilings can be accessed. The upper level of the porch can be accessed through a semi-circular arched doorway located along the staircase that leads from the lower level of the porch (from the side of the gate) to the upper rooms. The main facade’s defining feature is the arcade supported by quadratic pillars connecting through three semi-circular arches, with a lesene-like ornament on either side of the facade. The capitals of the lesenes have simple profiles, and grooved ornamentation, as well as a flower motif underneath. These lesene-like ornaments can be seen at the corners of the facade as well. The windows are hack arched, and have windows frames decorated with straight lines. The building was inhabited for centuries, after which it served several functions during communist times, and has since become a private property once more.