There is a memorial plaque at the forefront of the building, which reveals that Zathureczky Emília, the wife of Cserey János, used to live here. She was a great collector. In 1875 she founded a museum, and her collection became its central part. She dedicated her collection and her museum to the Szeklers in 1879, and her collection was the basic of today’s National Szekler Museum. 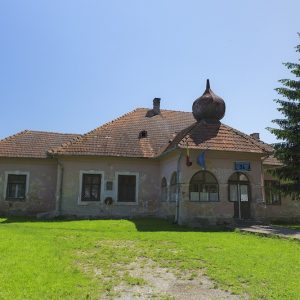 Before 1879, she hosted great personalities as visitors at her museum, such as major Pünkösti Gergely, lieutenant-coloner Turzson János, the widow of Damjanich János, Irinyi János, Jedlik Ányos, Orbán Balázs and Gyárfás Jenő. Zathureczky Emília died in 1905, and her son, Péter inherited the estate. Péter had wasted most of the heritage, and finally, after the end of the First World War, he sold the mansion to the local council, which the condition to use it as a public school.

The main characteristic of the mansion is the tin vault above the glazed portico. This is the only mansion in the whole “Háromszék” area, which has a preserved an onion dome. There are other precious original elements of the building which are still in good condition today. For example, the arched ceiling of the eastern annex, this part of the building serves as the home of a local teacher today, or the original window frames on the northern annex.

After 1945 they nationalized the estate, today it still belongs to the state, and it hosts an elementary school and a kindergarden for ethnic Hungarian children.