The mansion has empire-classicist style, and was built by Damokos Ferenc. It became the property of the Eperjessy family through marriage between the members of the two families. Later the mansion was sold to the Bartók family. 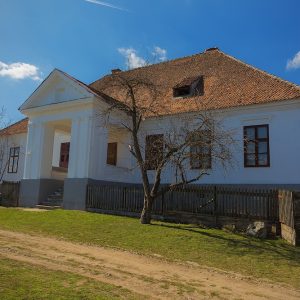 The building is made of stones and bricks, and the roof is covered with sharp-taled tiles. The classic-style portico is facing east, and its decorated pillars support a spandrel, which has a quadratic cabin for sculptures. Inside the mansion, there is a huge dining room, four other rooms (with flat ceiling), a kitchen, a chamber room, bathroom and an entrance to the attick. The attick has brick-floor, while the floor in the kitchen is made of stones. There is a cellar under the building, which has several premises. Some of the premises have vaulted ceiling, some others have beamed ceiling.