The mansion was built in the center of the estate, its courtyard has been transformed into a nice park at the turn of the 20th century, but it was destroyed almost totally after its nationalization. The park’s successful restoration started again after the 1970s. At the right corner of the house, there is a famous linden tree, which was said to be planted in 1882 in the presence and in honour of the great Hungarian writer, Jókai Mór. 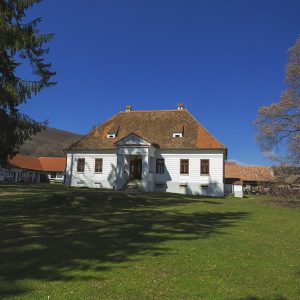 After the nationalization process started in 1949, the building had many functions: it was used as granary, birth clinic, housing for temporary workers and as pig farm as well. During these times the building started to decline, but luckily in 1937 senior teacher Haszmann Pál came with the idea to restore the premises and to transform it into a establish a folk museum. Since then the museum and the associated folk school movement brought international fame for the village.

In the cellar there is a collection of rare metal stoves. The courtyard is well organized – it has been transformed into an open-air museum, which hosts several old buildings and gates. In the northeastern corner of the courtyard there is another rare collection: one can find here the biggest collection of agricultural machines from Transylvania. As part of the folk school movement, several summer camps have been organized along the year, where hundreds of participants learned the art of woodcarving and painting furniture. The mansion house was renovated in 1993-1994, and it is still in good condition.