A 1931 photograph taken by Gönczi Ferenc shows that the small gate at the entrance of the estate once featured a baroque frontispiece. The manor was constructed from stone and brick. The main section of the building is divided by the protruding vaulted porch in the centre of the main facade, which features a trefoil gable. 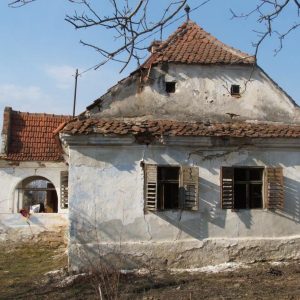 A wide, plastered brick course stretches along the walls’ half-way line, and a jerkinhead roof covered with tiles covers the house, with two small airshafts in the gable walls. The building’s proportions and roofing resembles that of the Saxon houses from nearby the nearby Barcaság. The gate’s pillars are segmented by ribbon motifs. They are also fluted and end in conventional floral ornamentation, typical of the copf style (classicising late-baroque) in the second half of the 18th century. The building’s fenestration was made at some time between the end of the 19th century and the beginning of the 20th century. The windows have segmental arches; their frames are divided into six segments and are covered with shutters. The layout of the building is regular, with a single tract and three segments. The rooms’ ceilings feature open beams, nont of these bear any inscriptions, however. An outhouse was attached to the building, and the ruins of the old granary made from stone can be seen in the courtyard.

The building was the property of the Pál family (who were previously called Bikfalvi Pál), after which it was owned by the Kovács family until 1925. Today, it is the private property of Ruzsa Magdolna.