The layout of the building is L-shaped. There is a large cellar, and the facade is proportioned by the asymmetrically protruding, historicizing turrets. A staircase with a wrought iron balustrade leads to the two wings of the buildings between the two turrets. 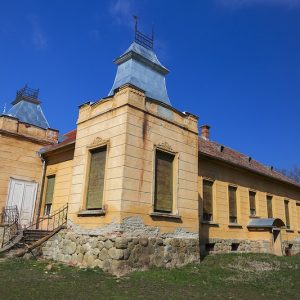 Sixteen additional outhouses have been erected around the manor (granaries, stables, warehouses, bakery, etc.), but Hadnagy István managed to retrieve only the manor and the granary after the estate was utilised by the Dálnok State Farm.