The manor was built by the best masters of that time. The manor – in terms of its ground plan – can be placed among the 18th century's manor-houses of Transylvania. Its rectangular ground floor reflects the influence of folk architecture. The manor-house, which has a cellar under the atrium, contains more rooms, a dining room, bedrooms, kitchen and restrooms. There is an open porch, supported by pillar, in front of the building. 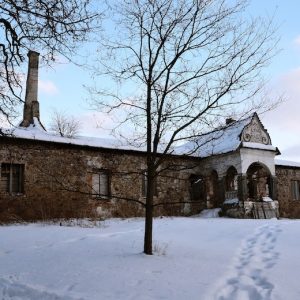 Its stone pillars are decorated with carved acanthus leaves and open garlands, which reflect a Renaissance influence. The manor has broken gable roof, covered with shingles – spread in Transylvania at the end of the XVIIth century. Above the porch, on the triangle-shaped gable there is the coat of arms of the Henter family – a stabbed crane with gravel in its claws. Over the centuries, the manor of Sântimbru was the scene of many historic events. The main scenes relate to the organization of the Szekler border guards : after the Massacre at Madéfalva (Siculeni), the intimidated rulers of  Alcsík (Ciucul de Jos) took the oath in the house of baron Henter Ádám. In April of 1765, Henter Ádám is named Chief Judge of Ciuc as reward of his role in organizing the Szekler border guards. Orbán Balázs also noted about the Henters that they were devout Catholics, who were not afraid of spreading their faith by force. In 1725, they took the church and the whole estate from the Unitarians of  Szentiván and after a half-century, from those along the Târnava Mică River. In 1777, the Henter family and expecially the baron Henter Ádám, as the patron of the settlement, contributed a significant donation for the improvement of the church of Sântimbru. (A few years later, he was buried in this church, in St Joseph's Chapel, where his tombstone, carved in 1781, is still visible today ).

Between the two World Wars, the manor located in the southern exit of the village was purchased by the local Roman Catholic Church. The dean and vicar,  Kovács Balázs, has ordered the renovation and the expansion of the building, which was then transformed into a religious school and a cultural center. In 1948, the religious school was natiolized, but for a while the building still housed the lower classes and the workshops of the school. The calvary of the building – like in the case of other noble and aristocration manors – started when the estate became the property of state's economy. The cellars were used as storage rooms for potatoes, fertilizer and chemicals, the courtyad was parceled for the purpose of constructing family houses. The new owners of the estate did not improve the manor, therefore its state has gradually deteriorated and the building's walls were attacked by fungi.

After the year of 1990, the manor was returned into the property of the Catholic Church of Sântimbru. Since 1992, it is included in the category of Historic monuments in Harghita County. After professional archaeological and biological examinations, the manor was listed in the register of the Ministry of Culture regarding the restoration of historical monuments. Within the period of 1997-1999, the Directorate of Cultural Heritage has allocated hundreds of millions of lei for the purpose of carrying out the most necessary interventions. In the meantime, the local parish concluded a preliminary contract with a Hungarian company that wanted to create a tourist center in the restored mansion. Under the agreement, the deteriorated roof was demolished with the guidance of the professionals of the Museum of Miercurea Ciuc. Probably due to the high cost of restoration, the Hungarian company that stopped the intentions, leaving the building without a roof. Subsequently the manor entered into the property of a contractor from Miercurea Ciuc, and as a building managed by a profit -oriented ltd., the manor was removed from the list of Historical Monuments supported by the Directorate of Cultural Heritage. It seems that the manor's process of decay is irreversible.