Located 44km from Oradea, the settlement was first mentioned in 1523 under the name of  ”Halmaghfalwa”, then in 1692 as ”Hagymad-Falua” and in 1851 as ”Hagymádfalva”(Spinuș). The name of Hagymád comes from the Hungarian noun ”halom” (pile) with a -gy suffix. It reffers to a hilly location. The name Hagymád was a result of a phonetic change and the suffix -falva (village) was added to it, which resulted todays name Hagymádfalva (the Hungarian name of Spinuș – the name of the village in Romanian). 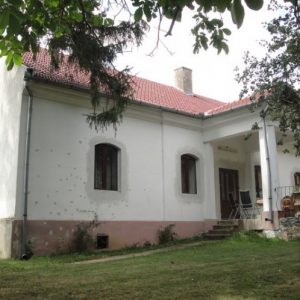 Originally, the main facade of the building with rectangular ground plan had a semicircular, arched porch with balustrade, but in the middle it was defined by an open, arched portico, supported by two pillars and two columns. The sides of the main facade contain corner risalits, the one from the right side having two semicircular windows and the one from the left side, one small round window. The large window which once was standing next to it was walled up and a small ventilation window was left there. The arcades of the once open porch were covered by large, semicircular arched windows. The lower two thirds of the three semicircular arched windows, situated on the left side-facade, were walled up. The building's right side-facade has also suffered changes: it contains two windows and a side entrance. The rear facade has six semicircular arched windows. Because of the changes, the once beautiful manor has no monument value today.