The initials of one of the porch’s builders, as well as the year of its construction, can be read on the ceiling: “1868 Má: S:” 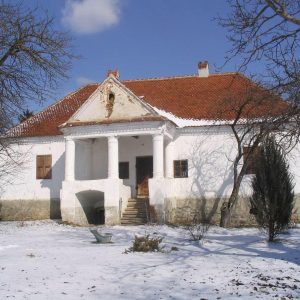 The facade facing the courtyard is defined by the porch and the two jack arched windows placed on either side of the porch. The windows have simple eyebrow lintels, which still feature the old window tablets. A jack arched door opens from the porch into the building. Two smaller (also jack arched) windows flank the main entrance. The door and the two small windows, as well as the pillared porch, are all connected asymmetrically to each other, suggesting that the building was constructed way before 1868, when the porch was added. The porch’s tiled cornice and the triangular gable with a small air shaft are supported by three columns with simple cylindrical decorations on their capitals, as well as two half-columns that are joined to the walls.

A barn once belonged to the manor, and had the year number 1843 inscribed into one of its beams. The barn was a listed building, yet was demolished by its owner in 2005 without permission.