The manor's appearance from today was given by the Pop family, who have restored the building and are running a hostel in it. 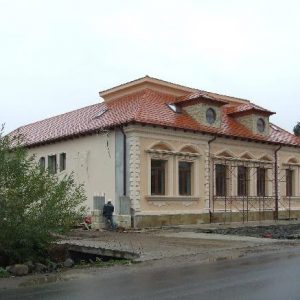 The manor house from Seini was one of the most beautiful buildings of the city. It was built by the Kávássy family in 1848. The first member of the Kávássy family moved here in 1829 due to marriage. The family has lost most of its property due to the agrarian reform after the First World War. Thus, Sándor Kávássy sold the manor and he moved abroad. The new owner, Ioan Buteanu, born in 1893 was a clever farmer who adjusted the manor to his own needs, but he couldn't profit of it for too long, as in 1949 the property was taken away, and he was transported to the south together with other rich people. After the nationalization, the estate served as the headquarters of the Communist Party and as a collective farm. Finally, it was abandoned, and the building's state started to decline.