After nationalization, the building was used by the Ministry of Agriculture as an experimental station of breeding, therefore the manor stands in a relatively good condition, not as the outbuildings which are in a very poor condition, having their roofs caved in. The building and the dendrological park was not reclaimed by anyone. 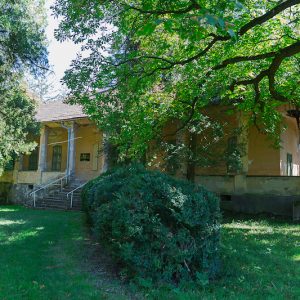 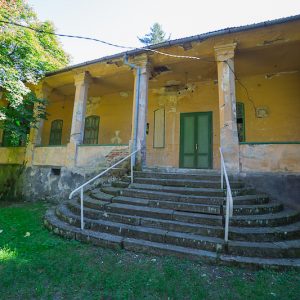 Originally the Klobusiczky family was an aristocratic family from the Highlands, coming from the Trenčín Region, Klobušice (now Slovakia). During the 19th century, Gurasada was the property of the Benedikty family, then, at the turn of the century, it became the property of the Klobusiczky family. The castle located in the village is tied to these two names. The last Benedikty owner of the castle, Lajos did not have any male successors, therefore one of his daughters,  Alexandrine Klobusiczky by marrying Andor in 1989 became in the posession of the estate.In the absence of documentation, it is not known which of the noble houses were left behind from the Benedikty's time and which were built at the order of the Klobusiczky family.

The single-storey building with rectangular ground plan has a special charm, which is given by the fact that on its three sides, its architect has created a balcony supported by columns, from which the park may be admired in all seasons. Precisely because of this balcony, despite of the approx. 30x15 meter total surface ,the living area is not very large, but even so the main hall exceeds 40 sqm. Besides the evenly spaced 20 columns situated on the three facades and the colored windows of the veranda, there is no other remarkable decoration left on the castle. Even the urns which decorated the gate columns disappeared in the last few years.