In the second half of the 19th century, the castle and the estate were bought by Várady Szabó Lajos, a merchant from Debrecen, who had fallen in love with the castle and its surrounding landscape many years before. (We can read about this in the family-novel, written by Szentmihályné Szabó Mária: Work belongs to man, blessing belongs to God.) 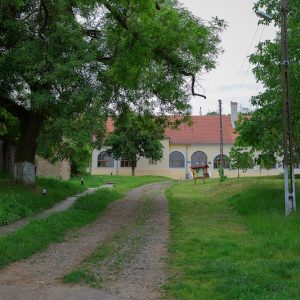 Várady Szabó Gyula then inherited the castle from his parents and lived there with his family until the end of the 19th century, after which he sold the estate and the castle to the Jasztrabszky family. The Jabsztrabszky family did not own the castle for long. After a few years they sold it to an army officer named Lovass István. Following a family tragedy and the sudden loss of his wife, Lovass István sold the castle and the estate to the Romanian government in 1938, and repatriated. After the Second World War, the building served as an agricultural collective and a daycare. After 1989, the property became increasingly neglected, and today only two families inhabit the castle, aided by social welfare.

The building is 52.40 meters long and 10.80 meters wide. Its walls are made of fired bricks, and are almost one meter thick. Some of the rooms (small rooms, large rooms, chambers, eight in total) have trough vaulted ceilings made from clay bricks, while the tower room and the corridor (veranda) have groin-vaulted ceilings. The rooms have wooden flooring. The roofs are tiled. The damaged or missing tiles were replaced by the agricultural collective. The building has two main entrances made of fired bricks. The servants’ wing is located east, its walls are also made of fired bricks, and it has a small basement. The wing was covered with wooden slates. The old farm buildings are located in front of the manor. These are comprised of rooms carved into the side of the hill. Their walls and vaults are made of brick as well. These rooms fulfilled the function of a stable, a coach house and a food storage. There are brick pillars on top of the edifice, to which wooden beams have been joined and serve as a railing. This latter building is called the ‘casemate’ by the locals, because of how it is constructed underground.