The Könczey-Páll manor house is still the property of the Páll family. On the pediments of its stone porch there is an inscription according to which the original shingled-roof manor was built in 1608 and reconstructed in 1829. 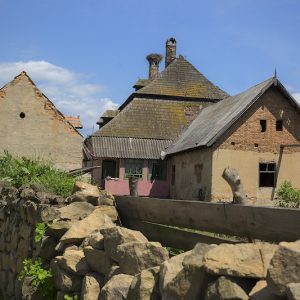 The impressive main building gained its today's look after several reconstructions and modifications of a former manor house dated to the 17th century. At the center of the southern side there is the main entrance indicated by a protruding, square portico supported by edged pillars. On its pediment, in a square cabin, there used to stand an inscription indicating the date of its construction. Today we can only see the word BUILT there. A plastered brick cornice runs along the building's eaves, and its windows are surrounded by simple frames.

The Páll family uses only the northern and eastern parts of the manor house today. Unfortunately as the shingle roof is damaged, the building is constantly exposed to water damage.