The estate was once surrounded by a brick fence, plastered and limed white, with a bench carved into the wall on both sides of the gate. Koós Manor lies on the southern side of the estate. It is a wooden structure covered with tiles. 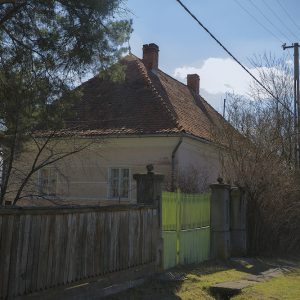 It has two entrances: the main entrance opens from a protruding portico facing south, while the other entrance faces west. The building was last renovated in 1932; the portico most likely obtained its current shape during that time as well. The construction of the Manor was commissioned by Koós András and his wife, Barabás Irma; the year 1807 is carved into the supporting beam above the kitchen.

After its nationalisation, Bende (Koós) Irma was forcibly removed from the estate on the 20th of August, 1950, and the manor was used by the agricultural collective as a warehouse. The owners could then move back into the manor in 1960; Bende Irma died there. Following her death, the building was used as a Catholic Chapel for a while, and then stood empty for many years. Forró János, who inherited the estate from his wife, sold the property to its current owner in 1998.