The building was once used as a kindergarten. The manor has become severely ruined over the past few decades and is now being renovated. Its once exceptionally beautiful garden full of botanical rarities has also become severely neglected. 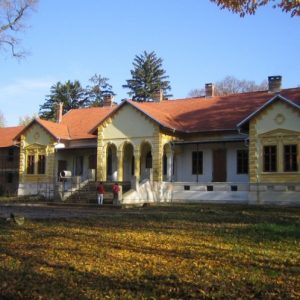 Popular belief wrongly holds that the settlement in question, which is located at Erdőhát, in Bihar/Bihor County, is the burial place of Árpád (head of the confederation of the Hungarian tribes at the turn of the 9th and 10th centuries). Although the first written mention of the settlement dates back to 1326, it was probably established during Árpád’s era. It was originally a royal estate, and was gifted to the Csáky family in 1423 by King Zsigmond. As it was part of the Körösszeg lordship, the evolution of the settlement was different from that of its neighbours: it remained a socage, but maintained its Hungarian character throughout. One of the martyrs of the 1848/1849 War of Independence, notary of the Parliament, Szacsvay Imre, was captured nearby, on a homestead name Gyepes. Táncsics Mihály and Arany János were also in hiding in this region.