One of the manors of the famous Mikó family from Hídvég lies on the upper bank of the Olt. Its current shape is no doubt the result of several modifying construction works. To the east of the building lies the farm-yard, which is bordered by deteriorated farm buildings. The castle eventually became the property of the Boér family before it was nationalised. 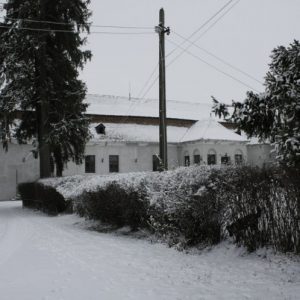 Until the 1990’s, the building functioned as a headquarter for the State Agricultural Industry. It did not become a listed building, and is protected only since 2001. Despite its protected status, neither its owners, nor its tenants treat it accordingly.

The oldest element of the 20th century complex stretching on the estate was the so-called “Bagolyvár” (Owl’s Keep in Hungarian), which was damaged during an earthquake in 1977, and was subsequently demolished. Today only the 18th -19th century late baroque building and its auxiliary building still stand. It has two floors and a rectangular layout. Its roofing has a sectioned surface, and an open portico with an asymmetrical composition, originally featuring arcades, as well as a small corner risalit are joined to it. The semi-circular openings of the portico were eventually shaped into jack arched windows. The building’s only ornaments are the plaster frames of its windows.