The manor house was built at the beginning of the 20th century. The style in which it was constructed corresponds with historicism. The single-floor building with an L-shaped layout has a gable roof, and a jerkinhead roof ending on its short wing. Its main facade is sectioned by wooden pillars that start from the plinth, and rise tall above the walls like little towers. 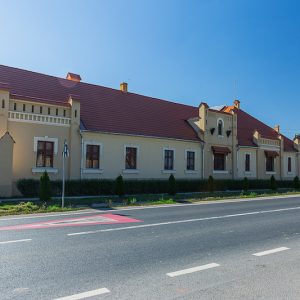 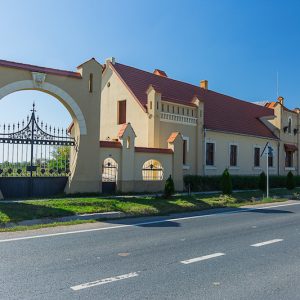 Jack arched windows open between the pillars, with window sills and lintels featuring keystones. From between every second wooden pillar, a crenellated frontispiece rises above the cornice (four in total). A pent-roof stretches above the windows. A window opens into the attic, with ornate flag holders on either side. A stairway leads to an entrance at the left side of the building. The right-side entrance opens from the columned veranda with the jerkinhead roofing, and leads to a stairway. The crenellated frontispieces and towering tops of the wooden pillars can be seen above the cornice, on either side of the protruding veranda. A semi-circular, bastion-like portico with similar crenellation is located at the joining of the two wings of the L-shaped building, on the interior side facing the courtyard. The main entrance and the wide staircase leading to it are located here. On the left side of the building, an ornate gate opens from the road to the courtyard. The manor’s chimneys and gate are modelled after the little towers. The tall, round-arched gate has an appearance similar to that of a horseshoe. The brick fence was also decorated in a similar fashion.