The manor house was built in Classicist style – it is surrounded by a plastered stone fence. The building has a rectangle shaped ground plan layout with two parts, it has a basement and its has a hipped roof. At the main entrance, at the central axis of the building there is a portico with columns and with a tympanum. 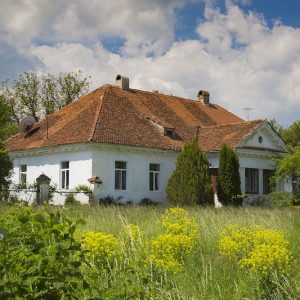 On the back side of the building there is a narrow porch, which is intersected by a smaller wing that used to be the so called “baking room” back in the days. On the main of the house and along its two sides along the gutter there is a ledge made of plastered brick. The building is painted white, most of its window shutters have been changed. In the dining room there is a square tile stove, which is very similar to the one at the Kálnoky Castle from Miclișoara. Ferenc Rettegi bought the estate from its original owner, Zsuzsanna Pótsa, in 1918 and his descendants still own and use the manor as their home.