The single-storey but relatilvely large building has a rectangle shaped ground plan. Its entrances are on the two smaller sides of the rectangle. Its main entrance used to be the on the east side, which has a portico with columns. On the western side there is a wooden porch, which connects the garden and the rooms. Since the nationalization the manor house has been functioning as a care home for old people. 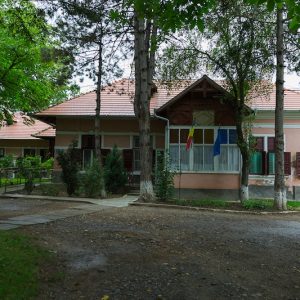 The Sándor family, originally from Mihăileni was present at Căpușu de Câmpie from the mid 18th century, after Pál (III) Sándor married Ágnes Szeredai in 1758. The estate was inherited first by their older son, Pál (IV), and then by their grandson, János (VI). János married Kata Medgyes from Eremieni, and they had five children – their oldest son, János (IX) (1815-1887) inherited the estate. He used the manor only as a summer house. He lived and worked in Târgu Mureș as a judge of the Royal Court. Most probably, there used to stand a more simple manor house in the place of this manor house. After his death his youngest son, János (X.) Sándor (1860-1922) became the owner of the property. János (X.) had an impressive political career: among others, he became Lord Lieutenant of the Kis-Kükküllő county. He married Anna Tisza (1862-1918), daughter of Earl István Tisza, prime minister at the time. Later, between 1913-1917, he became the home secretary of the Tisza government.