The manor house made of stone and brick has a south-facing facade and walls as thick as 80 cm. It is located in the south-western part of the village, on the right side of the river. 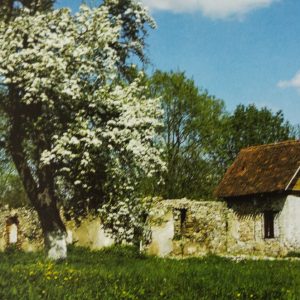 The building had pointed ends, it had a so-called 'jerkinhead'-roof covered with tiles provided from Bodoc. The middle of the southern facade was defined by a stone porch, proportioned by vaulted fenestration, covered by gable roof. A part of the building collapsed in 1950 and than, in 1957, the continuous leaking water, due to the deterioration of the roff, resulted in bigger cracks and damages . Subsequently, the earthquake of 1977 resulted the collapse of the vault, which contained frescoes dating from the 17th-century. The seven segments along the longitudinal axis of the Zălan Arch were decorated with acanthus-tulip flower motifs. Other tulip decorations were present on the two sides of the arch.