The wooden balks holding the ceiling with stucco decorations have rotten away, therefore they had to be replaced by copies. Above the portico there used to be a Baroque-style gable, which has collapsed, therefore a copy of it can be seen today. The façade is also decorated with stuccos. 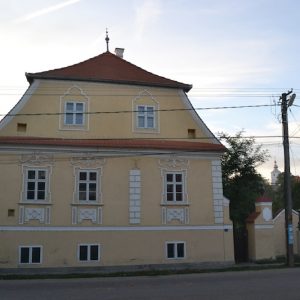 Between 1940-44 it used to be the headquarters of the local gendarmerie. The manor was damaged by the big earthquake from 1977: its condition was endanegered, the basement could not be used any longer, and its roof would have needed urgent repairs as well. However, despite its bad conditions, a dental clinic was established in the house in the 1990s.

Afterwards, the KIDA Foundation from the village and the local council - the owner of the manor – had signed a rental agreement for fifty years. Followingly, the foundation has established a modern medical center here, hosting a general practitioner’s office, a dental clinic and a pharmacy. Later, the foundation made plans to apply for grants for renovation and to establish a center for local women entrepreneurs in the manor. After receiving an 100 thousand dollars grant, they renovated the building and the well-known and appreciated fashion designer Júlia Kalamárné Simó and textil designer Klára Luka Sófalvi have moved their businesses into the manor. In the meanwhile an exhibition hall was established on the first floor hosting a permanent exhibition commemorating the famous Hungarian writers Mór Jókai and Kálmán Mikszáth, because both writers used to represent the village at the parliamentary meetings back in the days. Next to the building there are statues in honour of Mór Jókai, Kálmán Mikszátha and Dezső Szabó as well.