The building with a rectangular ground plan and high ground-level has a jerkin-head gable roof  On the right side, the main facade is defined by the avant-corps, which originally had two heightened windows, but one of these windows was transformed into a door. The left side's corner is imitating a tower. The main entrance, located in the middle, can be accessed by a few steps. 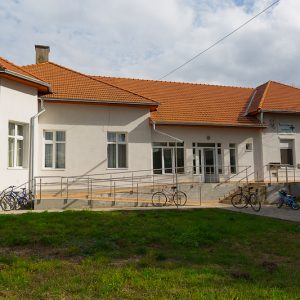 The building's windows are mostly jack arched windows, but those next to the main entrance were replaced with larger fenestration. The side with the tower continues on the right side of the rear facade, having elongated windows all around. The rear facade's aspect is the same as the main facade. This is reflected also by the height of the roof. The rear entrance can be also accessed by steps. Recently the right wing was expanded, which changed the original style of the building. The manor's interior has suffered several makeovers.