The Manor's north side, with small openings, is facing the main road. Overgrown shrubs are visible in its garden. The central axis of the facade facing the courtyard is defined by an arcaded porch with tympanum. Half of the Baroque gable, decorated with volutes has already fallen. Today it is a two-level Manor with vaulted rooms and small windows, an extension of the previous building. The extension is also evidenced by the geometric motif incised in plaster, reminding of quoining. Similar motif has appeared on the side of the Sinkovits Manor from Catalina. The Veress-Incze Manor is currently owned by the Incze family's descendants. 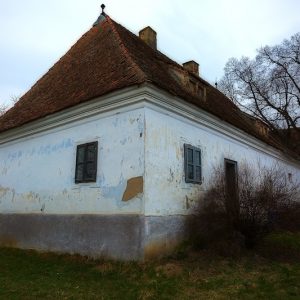